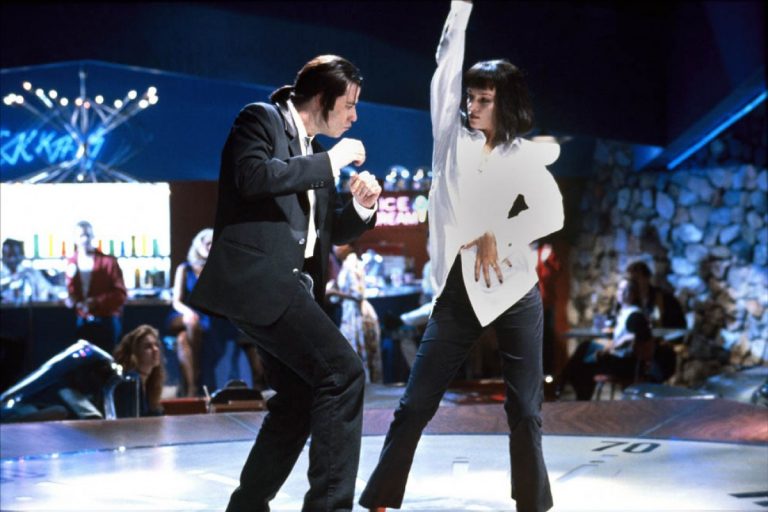 Written in collaboration between Simon Ruppert and Tanysha Bolger

If you live in Australia and are faced with having nothing to do these Autumn holidays, or just looking for some things to watch, why not cosy up by the fire place and catch up on some films from the past. Or if you’re overseas and just want to relax for a few hours, put your feet up and enjoy! So, here is Ezra Magazine’s top ten movie list! *Films are ranked in no order of importance or rating.

‘Trading Places” is definitely one to watch if you’re an Eddie Murphy fan. His acting and portrayal of his character Billy Ray Valentine is definitely one of the highlights of his career. Grossing almost $90, 400, 000 at the box office, this light hearted comedy is all about money, bets and of course, trading places. Written by Timothy Harris and Herschel Weingrod, Trading Places involves many melodramatic scenes between Billy Ray Valentine and Dan Aykroyd’s character, Louis Winthorpe. With the two characters switching their socio-economic status involuntarily, with the help of Ophelia (Jamie Lee Curtis), this film is one characters struggle to find the truth behind the set-up and claim what is rightfully his.

In the scene when Louis visits the club to borrow money, the actress who plays “Muffy” is Kelly Curtis, the sister of Jamie Lee Curtis.

Prior to “Pulp Fiction”, Quentin Tarantino was considered the best independent film maker in Hollywood. Its 1994 release cemented him as a respected film auteur quickly became a commercial and critical success. His use of a non-linier narrative and in depth dialogue would become synonymous with what makes a Tarantino film.

The plot follows a few stories which all intersect at various points throughout the narrative. Accidental shootings, drug overdoses and non-stop action keep you at the edge of your seat, whilst the humorous dialogue allows you to relate to these very outlandish characters. By this stage in Tarantino’s career every actor in Hollywood wanted to work with him, this is evident in the all-star cast, which includes Samuel L Jackson, Bruce Willis, Uma Thurman, Tim Roth, Harvey Keitel and Christopher Walken to name a few. He is also credited with reviving the career of John Travolta who he cast in the role of Vincent Vega and subsequently delivered a career defining performance.Put quite simply this is a must watch film. It defined its genre and made Quentin Tarantino a household name.

The shot of Vincent plunging the syringe into Mia’s chest was filmed by having John Travolta pull the needle out, then running the film backwards.

Probably one of the best films John Hughes directed and produced, “Ferris Bueller’s Day Off”  is all about Ferris and his best friends Cameron and Sloane, and their decision to fake sick and enjoy the day off. Ed Rooney, the Dean of students at Ferris’ high school, knows that Ferris is lying, so throughout the whole day he attempts to thwart Ferris’ plans, but ultimately fails miserably. Whilst this movie ingeniously ‘breaks the fourth wall’ at certain moments, it does so with integrity and with purpose – creating a certain element in a film we never usually see. Matthew Broderick ‘s brilliant comedic timing combined with the talents of Alan Ruck (Cameron Frye) and Mi Sara (Sloane Peterson), “Ferris Bueller’s Day Off” will be a film you can laugh at for years and years to come.

During the parade several of the people seen dancing (including the construction worker and the window washer) originally had nothing to do with the film. They were simply dancing to the music being played and John Hughes found it so humorous that he told the camera operators to record it. Also the hall scenes in which you see Jeanie walking down the hall and kid collecting money to save Ferris are the halls from The Breakfast Club.

1994 was a strong year for movies with the release of many future classics. Frank Darabonts cinematic heavyweight “The Shawahank Redemption” stands out above most. The film follows the hard luck story of Andy Dufrense (Tim Robbins), a young banker wrongly imprisoned for the murder of his wife. Befriended by prison merchant Red (Morgan Freeman) he survives day by day in the face of brutality, corruption and injustice. In essence it is a buddy story, a dark one but a buddy story nonetheless.

The lead role of Andy Dufresne was originally turned down by both Tom Hanks and Kevin Costner. This turned out to be good news for movie fans as Tim Robins delivers one of the strongest performances of his career. His on screen chemistry with Freeman combined with one of the best twists in modern cinema keeps the audience on the edge of their seats.

In Stephen King’s original story, Red was written as a white Irishman. In the movie, they left the line, “Maybe it’s ’cause I’m Irish”, in as a joke, even after they had cast Morgan Freeman as Red.

A robbery gone horribly right, this film is a hilarious comedy with stutters, twists and of course seduction. One of John Cleese’s personal favourites that he has starred in,  A Fish Called Wanda is a brilliant laugh and has an all star cast to back it up. Two couples trying to double cross each other after a diamond heist works in favour of the two parties is terribly funny to watch it play out on screen. The loveable and hilarious John Cleese never fails to impress either, working alongside his Monty Python troupe friend Michael Palin always seems to work in favour for comedic timing.

1993 was another year for the movie buffs and docu-dramas, and to put the icing on the cake, Steven Spielberg directed “Schindler’s List” which stars Liam Neeson, Ralph Fiennes and Ben Kingsley respectively. Set in Poland during World War II, this 195 minute film tells the story of a man called Oskar Schindler (Liam Neeson), a successful businessman and opportunistic member of the Nazi party. With the military supporting him and to make use of the cheap labour of prisoners, he makes a contact in the Jewish community Itzhak Stern (Ben Kingsley) and together they deviate a plan to hire the Jewish prisoners because they essentially do not cost anything. Schindler agrees, and by forging paperwork Stern manages to (under the Nazi regime) deem many Jewish workers ‘essential’, and save them from getting transported to concentration camps and getting killed. However,  Amon Goeth (Ralph Fiennes) arrives nearby in Paszów and builds a labour camp which compromises of all of Schindler’s workers.

In black and white this film gives emphasis to the horrors and tragedies that befell upon the Jewish prisoners in the concentration and labour camps. Spielberg also uses the only splash of colour (red, pictured above) to symbolise innocence, and the blood of war. For anyone with ancestors who survived the war, who died or just has a sense of compassion for humanity, this largely true story very much deserves it’s number 8 spot on the IMDB 250. A must watch for a lesson in history and film making!

Steven Spielberg was not paid for this film. He refused to accept a salary citing that it would be “blood money”.

“The Goonies” is that film from your childhood you probably saw but forgot about a long time ago, because you had to go and ‘grow up’. But now that’s all over you can relive the memories and the brilliant story of the reject kids that call themselves, ‘The Goonies’. Full of adventure and (mis)fortune, The Goonies presents the now nostalgic principles of embarking on an adventure in the hopes of finding long lost treasure. This childhood classic comes from the talented work of director Richard Donner, and of course with Steven Spielberg writing the story and Chris Columbus (producer of the first three Harry Potter franchise films) adapting it into screenplay, The Goonies will always be around to watch whenever you need a little encouragement to never stop dreaming.

The cast was not allowed to see the pirate ship before the scene was shot. When they did see it, some of the kids said “Holy shit!” (As the ship was entirely real and built full scale). The scene had to be re-shot without them cursing.

Monty Python’s “Life Of Brian” is a film that somehow found it’s way onto the dusty DVD shelf in your living room, but still manages to make you laugh every time you put it in the player. Directed by Terry Jones, and written by Monty Python (the comedic group), “Life of Brian” is about a man called Brian; the accidental and reluctant messiah. A film that pokes fun at other historical films and satires the stereotypes, it is Monty Python at their best. Setting apart the ‘individuals’ from the ‘followers’ and the Judean People’s Front from the People’s Front of Judea, this comedy is another film that will be making generations of families laugh for years to come.

When Michael Palin as Pontius Pilate addressed the soldiers daring them to laugh, he was truly daring them. The soldier extras were ordered by the Pythons to stand there and not laugh but not told what Palin was going to do.

“Dead Poets Society” is a film you most likely would have seen in your high school years as studying exercise in English; but it is so much more than that. Directed by Australian film-maker Peter Weir, this tale tells the story of a group of boys who fall in love with the eccentric language of poetry, and who must come to understand that their life is for their own choosing, and no one else’s. Set around the group of boys and a private school, their new English teacher Mr. Keating (Robin Williams) encourages the boys to strive out of the classroom and appreciate life in full stride. Another film with a lot of symbolic elements, this film is worth watching again to appreciate the cinematography and acting from the cast.

The boy in the movie who says the line “The cat sat on a mat” was a St. Andrew’s student at the time. He earned more than his teachers that year.

An insomniac (Edward Norton) tries to channel his aggression into therapy, in the form of a “Fight Club”. With his counterpart who is a slippery-soap salesman (Brad Pitt), the two begin to rival for love and power, which is brilliantly portrayed by both Norton and Pitt. The technique of giving The Narrator (Edward Norton) no name, is a trick usually employed by films to inspire their audience to place themselves in the situation – but for “Fight Club” we assume it’s for the psychology behind the emptiness and loneliness felt by a sufferer of insomnia. “Fight Club” is not a film you’d expect Norton or Pitt to star in, but indeed the author of the novel that Fight “Club” is based on, Chuck Palahniuk has previously stated that he thinks the film is so much better than his book, and brings a lot of life out of his story.

In the short scene when Brad Pitt and Edward Norton are drunk and hitting golf balls, they really are drunk, and the golf balls are sailing directly into the side of the catering truck.

*All ‘Film Facts’ are sourced from the IMDB.